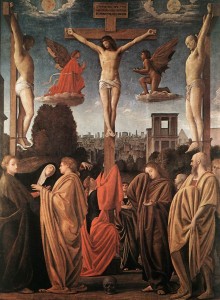 As the Ancient Mysteries were fading, especially from the 4th century BC until the 1st century AD, the priests were very aware of a decline in their mysteries. No longer could their initiates reach back to the times when mankind and their gods interacted. No longer could their rituals invoke their folk spirits to descend and participate and guide. Traditions and knowledge passed down alone kept the people and their mystery center together. The priests feared what was to come. For them it appeared that without a renewal of their spiritual connection, all would be lost. Humanity would experience a spiritual death.

Christ entered and through the Mystery enacted on Golgotha, the new path, the new human became possible. Thus, Grunewalde depicts John the Baptist as saying at the cross “He must increase and I must decrease”.

This was what early Christianity was about.