Easter was THE important Christian festival. St. Paul said, “If Christ be not risen, then is your faith vain.” A key purpose to the Council of Nicaea was to set the date of Easter (as calendars in those days had insufficient leap years to prevent the spring equinox from sliding in March towards February). The festival of the birth of Jesus was not at all celebrated. Christians felt that Jesus (both of Matthew’s gospel and of Luke’s) was born as a man and Christ entered this body at the baptism. As full of mystery as birth and baptism may be, for early Christians the important new mystery was what happened from Golgotha to the grave to the resurrection.  With the early Christians, we do not find symbols of the suffering of Christ; rather we find their focus is on the resurrection.

Later, after 325 when the Council of Nicaea took place, materialism began to set in; even Christianity succumbed. The symbolic emphasis moved to the suffering Christ on the crucifix, to the bodily suffering of Christ. The crucifix is the expression of the transition to materialism taking root in Christianity. Spiritual reality is expelled by materialism. This comes to full reality with the 8th Ecumenical Council (Fourth in Constantinople). Here, by majority vote of the bishops, 27 canons were passed. The eleventh canon states “Though the Old and New Testaments teach that a man or woman has one rational and intellectual soul [compare to Aristotle], and all the fathers and doctors of the church, who are spokesmen of God, express the same opinion, some have descended to such a depth of irreligion, through paying attention to the speculations of evil people, that they shamelessly teach as a dogma that a human being has two souls, and keep trying to prove their heresy by irrational means, using a wisdom that has been made foolishness. Therefore this holy and universal synod is hastening to uproot this wicked theory now growing like some loathsome form of weed. Carrying in its hand the winnowing fork of truth, with the intention of consigning all the chaff to inextinguishable fire, and making clean the threshing floor of Christ, in ringing tones it declares anathema the inventors and perpetrators of such impiety and all those holding similar views; it also declares and promulgates that nobody at all should hold or preserve in any way the written teaching of the authors of this impiety. If however anyone presumes to act in a way contrary to this holy and great synod, let him be anathema and an outcast from the faith and way of life of Christians.”

Photius, who is revered as a saint in the Eastern Church but despised in the West, had argued that Aristotle indicated that each person has two aspects to their soul, one aspect focuses on the senses of the physical body and is thereby liable to error while another aspect focuses on the spiritual and is thus immune to error. With this decree, however, the human was reduced; no longer body, soul, and spirit, but now only body and (one) soul. One could be excommunicated from Christ’s Church for stating anything differently. When Christianity reaches the twentieth century, few theologians use or understand the term ‘soul’ anymore. Materialism reigns supreme.

Following this Ecumenical Council, the Eucharist was altered. Only the ‘prepared’ priests could receive the wine while all received just the body, the bread. For the congregation, this meant only the body matters. The troubadours then come to this drama to sing about the search for the Holy Grail. Where has the blood of Christ gone? Spirit triumphant over death, over the physical fades away replaced by portrayals the pain-racked soul of Jesus. Who guards and sustains mankind? Replacing the Triumphant Son of Man is the Man of Sorrows.

The Knights Templars dash onto this scene two hundred years later. In their initiation ceremony, one was led to understand why they rejected the crucifix as a symbol of their Christianity. Supposedly, during the initiation process, the elect was to spit on a cross that had an image of the suffering savior.

Western culture where materialism is most deeply rooted must find a renewal of the Easter experience. The renewed Easter thought should lead one to be lifted into the Spirit.  Christ then becomes ‘visible’ as a super-sensible, super-earthly Being who entered into the stream of earthly evolution.

At the tomb that is the body, do we see only the stone? When we enter the tomb (Oh Man, Know Thou Thyself — Delphi) can we see the Kingdom within? Will we find “The One you seek is not here” or will we find “The One Who is here now,” the one Who from the spirit calls you to your spirit-awakening.

“In this Easter mood we shall also be able to find the strength with which our will must be imbued if the forces of decline are to be countered by those which lead humanity upwards. We need the forces that can bring about this ascent. And the moment we truly understand the Easter thought of Resurrection, this Easter thought — bringing warmth and illumination — will kindle within us the forces needed for the future evolution of mankind. Easter must become an inner festival, a festival in which we celebrate in ourselves the victory of the Spirit over the body. But we need the Christ for Whom we can seek in our inmost being, because when we truly seek Him, He at once appears.” — Rudolf Steiner,The Festivals and Their Meaning II, Lecture 4, March 27, 1921.

Like these questions above, the study of Embryology gives us some wonderful leading questions to this subject of consciousness. Here are some more:

Much of modern philosophy on consciousness begins with an adult in its study. Only a few years ago, it was felt that by about 7 years of age, t

he brain completed its infrastructure development as a hard wired machine that now could be properly filled with knowledge data.  Mental illness was typically seen as irreversible because it arose out of ‘bad wiring’.  Today plasticity of the brain has been recognized but often this fixed-brain psychology persists in practitioners.

Futurologists such as Ray Kurzweil insist that artificial intelligence (AI) will one day soon be able to ‘reverse engineer’ the brain and thereby endow a computing machine with the ability to think and act like a human being.  Ray goes on to claim that with the exponential growth in computing capabilities, that by mid-century (roughly 2050) we will pass a Singularity point after which AI will race along leaving carbon-only humans behind. He states that to survive we will need to become a hybrid person, part carbon-based and part computer (silicon based) and eventually the weaker carbon-based part will disappear.  This concept of a hybrid human, oddly, may have some unintended truth to it which I’ll discuss in another offering later.  In many ways, we began down this path with the ‘personal computer’. But the intention that we can reverse engineer the brain to build a computer-based mind will fail because it fails to recognize the role of soul in human thinking.

Soul? Is not this an out-dated concept rejected in the 19th century? Indeed, materialism has sent the concept of soul to its death. Only religion, it seems, holds on to the concept to use it for the promise of an afterlife. Now, through an examination of pre-birth, through embryology, we can ask if this materialistic concept makes sense! [BTW, until the 8th Ecumenical Council at Constantinople, the human was always thought of as soma, psyche, and pneuma: body, soul, and spirit].

We turn now to embryologist Jaap van der Wal, some of whose work can be found here.  One of his [slightly edited quoted] papers show that “an embryo ‘behaves’. It is shaping its body, it moves, it performs (literally).  The first manifestation of behavior we exhibit as the psychosomatic body-mind being that we are, is our morphological behavior – that is to say, our body.  The gestures we make on the physiological level are also performance, the en-act dimension in us.  Going upright, finding the balance, centering: these are acts of the soul, of the human Self or spirit.  Before we can do these psychologically, we perform them physiologically at about one year of age, as in, trying to get upright in a playpen.  And even that is not the first time.  The first time you found your balance was when you shaped and organized the bodily organization as an embryo.  The human body is the only primate and mammalian body where the gravity center is organized inside and within the body.  To come to yourself as a human being you need the organization for that, i.e., a body (not only a brain) that can do so.  This is exactly what you do in the growing and shaping of your body as an embryo: you perform here the act of going upright and balancing in a morphological way.”

“Our body is behavior, human behavior, to be explicit.  The body is not a thing, an anatomical substrate; it is a performance, a function, a behavior.  Soul does not have a body, it is body; body does not have a soul, it is soul.  Even your 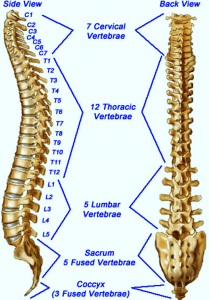 skeleton and brain (organs that for example are nearly structuralized to death and physical substance) are ‘on the move’, are processes. [Note the mystical numbers: 7, 12, 5, 5, 3]. I learned from embryology, Motion is primary, form is secondary!  Form arises out of motion (and not the reverse as reductionistic thinkers always propagate).  In that motion a behavior is performed.”

“Within the embryo, form and function are still related and linked together firmly.  Bodily and physiological functions are pre-exercised as growth gestures and as growing movements in the embryo.  In this respect a human being has already breathed long before he has taken his first breath after birth.  The dynamics with which lungs, thorax and diaphragm are developing and unfolding may be considered as a type of breathing because these dynamics are already breathing movements.  Considered in this way, an embryo looks, grasps, walks.  This can be called morphological behavior.”

Thus, I am a being of soul and body (not body and soul). It is not my muscles that move me, rather, it is my willing activity in my soul directed from my I that moves my limbs.  I am integrated with my body for my life on earth but I must not be confused to believe that my body is me or is moving me.  Consciousness is primary.

This takes us to more leading questions: