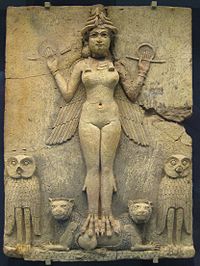 In a conversation today, the Goddess Ishtar was mentioned.  Her rites, it was suggested, may be a possible forerunner to the Easter bunny and egg festival. I looked up Ishtar and found this interesting passage in Wikipedia: (keep in mind Ishtar is an immortal, Gilgamesh is a hero but a mortal).

Ishtar in the Epic of Gilgamesh [from Wikipedia]

The Epic of Gilgamesh contains an episode involving Ishtar which portrays her as bad-tempered, petulant and spoiled by her father. She asks the hero Gilgamesh to marry her, but he refuses, citing the fate that has befallen all her many lovers:

“Listen to me while I tell the tale of your lovers. There was Tammuz, the lover of your youth, for him you decreed wailing, year after year. You loved the many-coloured Lilac-breasted Roller, but still you struck and broke his wing […] You have loved the lion tremendous in strength: seven pits you dug for him, and seven. You have loved the stallion magnificent in battle, and for him you decreed the whip and spur and a thong […] You have loved the shepherd of the flock; he made meal-cake for you day after day, he killed kids for your sake. You struck and turned him into a wolf; now his own herd-boys chase him away, his own hounds worry his flanks.”

Angered by Gilgamesh’s refusal, Ishtar goes up to heaven and complains to her father the high god Anu that Gilgamesh has insulted her. She demands that Anu give her the Bull of Heaven. Anu points out that it was her fault for provoking Gilgamesh, but she warns that if he refuses, she will do exactly what she told the gatekeeper of the underworld she would do if he didn’t let her in:

“If you refuse to give me the Bull of Heaven [then] I will break in the doors of hell and smash the bolts; there will be confusion [i.e., mixing] of people, those above with those from the lower depths. I shall bring up the dead to eat food like the living; and the hosts of the dead will outnumber the living.”

Anu gives Ishtar the Bull of Heaven, and Ishtar sends it to attack Gilgamesh and his friend Enkidu. Gilgamesh and Enkidu kill the Bull and offer its heart to the Assyro-Babylonian sun-god Shamash.
While Gilgamesh and Enkidu are resting, Ishtar stands upon the walls of the city (which is Uruk) and curses Gilgamesh. Enkidu tears off the Bull’s right thigh and throws it in Ishtar’s face, saying, “If I could lay my hands on you, it is this I should do to you, and lash your entrails to your side.” (Enkidu later dies for this impiety.) Then Ishtar called together “her people, the dancing and singing girls, the prostitutes of the temple, the courtesans,” and had them mourn for the Bull of Heaven.
Now, what is the Bull of Heaven? Recall that in the time of this myth, we were in the midst of the sun in Taurus at the vernal equinox. The Bull represents the basic sensory experiences of the physical body. Later, when we enter Aries, the Lamb, we also have the rise of Mithraism whose descendant is the bull fighting in Spain (and Latin America). Mithra must kill the Bull to rise to higher consciousness. Overcoming the bull is also in the Greek myth of the Minotaur which is a word from the combining of (King) Minos and Taurus. The wife of Minos wanted to copulate with the Bull of Heaven and in so doing gives birth to the Minotaur. Each year the Athenians must offer up virgin boys and girls to the Minotaur until Theseus slays the Minotaur and escapes from the labyrinth (we could go into what labyrinth means another time) with the help of Minos’ daughter Ariadne. Here we have a story of the human soul who, in the wife of Minos, wants to “marry” the physical body, to enjoy the sensuality provided by the body. Theseus represents the spiritual man and Ariadne the soul who desires the “mystical marriage” with her spiritual member Theseus. (Next comes the part of Icarus in the story and flying over the “sea” from the island to the land of the spirit. But such a path is narrow; one cannot soar too high (into Lucifer’s realm) or too low (into the earthly, Ahriman’s realm)). One may ask, what is the relationship of Mithraism to Christianity? Mithraism could be called a cosmic Christianity in the time of Aries.
For me, Easter is the beginning of the Fulfillment of the Promise, the New Adam, the Overcoming of Death that began at baptism when the Logos entered the body of the man Jesus making this entity Jesus-Christ (I-CH in German or IX in Greek). The God whose name is I AM entered not just as an avatar into the body of Jesus, but fully becomes Man on Golgotha with death. The blood had been transformed to the blood of this God-Man (or Man-God) and flowed into the Earth. The transformation is stated when His side is pierced and out flowed blood AND WATER. On the third day, the stone in him is removed (as is the stone to the tomb). His physical body has been transformed – the Third Temple arises, rebuilt in 3 days. His body is real but has no mineral composition so even Mary and the disciples cannot at first recognize Him. By doing this, He has made it possible for each of us to do so. He is the New Adam.
Avatar comes from ancient Sanskrit and means ‘ descent ‘ as in descent of a divine being to earth. Such a spiritual being descends into a human body not for it self but in order to intervene in evolution as a human being, Nothing of any significance is experienced here in the physical world. An avatar enters a physical body for the blessing and advancement of mankind.
May you all have a blessed Easter.