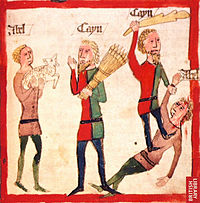 It is time for some mysteries to be made known.  Let’s start with an ancient mystery whose story applies today, namely that of Cain and Abel.  This quote of Genesis 4 (King James Version) from http://www.biblegateway.com will help us put the common story in our minds.

“4.  And Adam knew Eve his wife; and she conceived, and bare Cain, and said, I have gotten a man from the Lord.  And she again bare his brother Abel. And Abel was a keeper of sheep, but Cain was a tiller of the ground.  And in process of time it came to pass, that Cain brought of the fruit of the ground an offering unto the Lord.  And Abel, he also brought of the firstlings of his flock and of the fat thereof. And the Lord had respect unto Abel and to his offering: But unto Cain and to his offering he had not respect. And Cain was very wroth, and his countenance fell.  And the Lord said unto Cain, Why art thou wroth? and why is thy countenance fallen?  If thou doest well, shalt thou not be accepted? and if thou doest not well, sin lieth at the door. And unto thee shall be his desire, and thou shalt rule over him.  And Cain talked with Abel his brother: and it came to pass, when they were in the field, that Cain rose up against Abel his brother, and slew him.

And the Lord said unto Cain, Where is Abel thy brother? And he said, I know not: Am I my brother’s keeper?  And he said, What hast thou done? the voice of thy brother’s blood crieth unto me from the ground.  And now art thou cursed from the earth, which hath opened her mouth to receive thy brother’s blood from thy hand; When thou tillest the ground, it shall not henceforth yield unto thee her strength; a fugitive and a vagabond shalt thou be in the earth.  And Cain said unto the Lord, My punishment is greater than I can bear.  Behold, thou hast driven me out this day from the face of the earth; and from thy face shall I be hid; and I shall be a fugitive and a vagabond in the earth; and it shall come to pass, that every one that findeth me shall slay me.  And the Lord said unto him, Therefore whosoever slayeth Cain, vengeance shall be taken on him sevenfold. And the Lord set a mark upon Cain, lest any finding him should kill him.

And Cain went out from the presence of the Lord, and dwelt in the land of Nod, on the east of Eden.  And Cain knew his wife; and she conceived, and bare Enoch: and he builded a city, and called the name of the city, after the name of his son, Enoch.  And unto Enoch was born Irad: and Irad begat Mehujael: and Mehujael begat Methusael: and Methusael begat Lamech.  And Lamech took unto him two wives: the name of the one was Adah, and the name of the other Zillah.  And Adah bare Jabal: he was the father of such as dwell in tents, and of such as have cattle.  And his brother’s name was Jubal: he was the father of all such as handle the harp and organ.  And Zillah, she also bare Tubal-Cain, an instructer of every artificer in brass and iron: and the sister of Tubal-Cain was Naamah.  And Lamech said unto his wives, Adah and Zillah, Hear my voice; ye wives of Lamech, hearken unto my speech: for I have slain a man to my wounding, and a young man to my hurt.  If Cain shall be avenged sevenfold, truly Lamech seventy and sevenfold.

And Adam knew his wife again; and she bare a son, and called his name Seth: For God, said she, hath appointed me another seed instead of Abel, whom Cain slew.  And to Seth, to him also there was born a son; and he called his name Enos: then began men to call upon the name of the Lord.”

Of these two, Cain and Abel, which is more like you and me?  Cain labors on the earth for his keep while Abel merely watches over what is given to him by Jehovah.   While we likely would not kill our own brother in a crime of passion, we can say that we are more like Cain but that we aspire to be more like Abel.

While Cain and Abel were separate blood lines, today we can say that all humans appear to be a mixture of both.  I shall leave for later the question of when did these blood lines become united?  Why was Cain’s sacrifice rejected?  It reads “to his offering He had not respect.”  Why was there no respect for the hard-won fruits of Cain’s efforts?

With Abel gone without any offspring, Adam and Eve conceive another, Seth, to be the progenitor of the Abel line.  The Sons of Abel take what the Divine has offered; they take it as it is without altering it.  They see the perfection of God’s work in all of Nature.  They enjoy a gift of wisdom about life and their relationship to God.  They revere and keep this relationship seeking to sacrifice to God the best of what God has given to them.  In this way, God knows His creation is well.

But Cain engineers what was given.  Cain seeks to know and to change the world.  Cain expresses egoism – but not in a way that allows him to not only engineer the world but also himself.  He is capable not only of evil but also of supreme goodness through transformation of his soul.

Let’s look a bit deeper into the roots of this.  When Eve says, after giving birth to Cain, ” I have gotten a man from the Lord” she is indicating that Cain is not from Adam but from another Elohim.  Earlier in Genesis it read “And God said, Let us make man in our image, after our likeness”.  The word “God” here actually is the plural of the word “Elohim.” In the mysteries, the Elohim together make Man.  One, unnamed, creates Eve and then she conceives because of this unnamed Elohim.  Another Elohim, Jehovah, creates Adam.  Adam then unites with Eve to bring forth Abel.  So Cain carries an inner initiative from one Elohim while Abel carries that from another, Jehovah.  When Cain and Abel make their sacrifices, they both sacrifice to Jehovah but Jehovah cannot appreciate or respect the sacrifice of Cain.  This in itself is fertile ground for meditation.  Contemplate the effect on one’s countenance when your best fruits of your honest labor is rejected by your God.  Contemplate the soul mood of Abel and of Cain – and of Jehovah.

Confusion easily enters here because of the translation of the Hebrew word Elohim into God.  Here Elohim is plural.  The translation uses the plural terms “us” and “our”. Many early Christians believed that the God,  Jehovah, of the Old Testament, was not the same God that Christ refers to as The Father.  They found proof of this in the different levels of love expressed by Jehovah and by Christ’s Father.  For these early Christians, Jehovah was one of the Elohim while God the Father is at the height of the Heavenly Hierarchies, one of the Holy Trinity. More on this theme later.

So, according the ancient mysteries, one Elohim creates Adam while another creates Eve who is impregnated by this unnamed Elohim.  After giving birth to Cain, Eve later becomes impregnated by Adam resulting in Abel – and later still, after Abel’s death, resulting in Seth.  These form two streams of humanity – one a priestly lineage from Abel/Seth and the other a builder/warrior lineage from Cain.

I have hinted that these two streams later will unite in the mystery of Jesus-Christ.  Another important story of these streams comes in the building of Solomon’s Temple.  We’ll take up that mystery in my next blog.